Big Announcement:  We are very excited to announce that we are now carrying the entire line of Jumpsport Trampolines. We are an authorized dealer for the Jumpsport brand of trampolines that includes Alleyoop Trampolines. Jumpsport trampolines are considered among the safest trampolines in the world because of many unique safety features such as their patented safety enclosure system. Our professional installers are also experts at assembling Jumpsport trampolines. Feel free to check out some of the trampolines we carry by clicking on our Products page.
*** Featured News: Woman loses 113lbs in one year on a trampoline!! *** 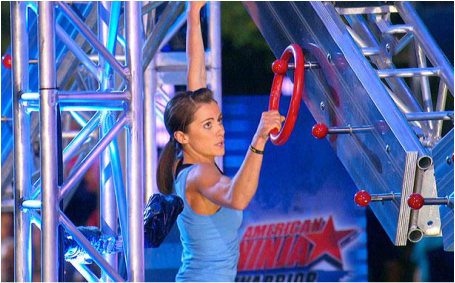 Kacy Catanzaro was the stand-out star of the 2014 ANW season. She became a fan favorite because she defied all logic with her amazing feats. Last season, the tiny but mighty Catanzaro became the first woman to climb the show's famed Warped Wall in a moment that turned the former gymnast into the a global face for the reality competition after her tremendous feat went viral. Kacy has a strong background in gymnastics and undoubtedly spent many hours training on a trampoline!

Here is the moment that American Ninja Warrior diehards have long waited for. To see their beloved Kacy make her debut on the 2015 course. It happened this past Monday night in Houston. If you happened to have missed it, we have you covered.

Thank you for visiting the Trampolines Los Angeles homepage. We are excited to announce that we just passed 1,000,000 views of our website. We enjoy sharing trampoline related stories, pictures and videos with our fans. Since the launch of our Trampoline Blog, we have had many of our posts shared around the web. 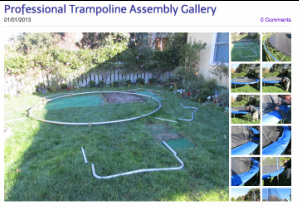 We carry new Pro and Propel trampolines. Available for pickup and self-installation or delivery and professional installation. Southern California's trampoline dealer direct store. Here is a list of cities we service in Los Angeles County

Check out our new Trampoline Videos page. We also just posted a gallery
showing our professional installer assembling one of our Trampolines.

The purpose of a trampoline is to provide a great bounce for jumpers. What is the point of owning a trampoline if it does not function the way it is supposed to? Read up on how to make sure your trampoline keeps its' bounce! 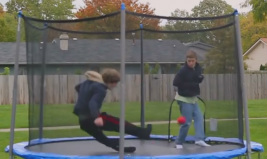 With the start of the 2014 World Cup in Brazil, Soccer fever has taken over. We have a fun way to get in on the action from the comfort of your own backyard. Yes, you guessed it, it involves a trampoline!

With the following how-to instructions, you can learn how to easily transform your backyard trampoline into a soccer field for little or no cost. 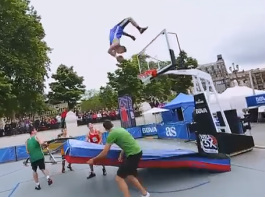 We found this amazing ﻿Backflip off the Backboard Dunk﻿ video. The stunt was performed by the acrobatic team "Lords of Gravity". We think you will see why these guys live up to their name. They used a trampoline to perform this amazing dunk and even unfolded it mid-jump! We felt this video had to be shared. Have you filmed a funny clip that involves your trampoline? We would love to see it and possibly share it.

We at Trampolines Los Angeles hope you had a good holiday season. We found a very funny video of an Elk that accidently got itself trapped on someone's backyard trampoline. We felt this video had to be shared. Have you filmed a funny clip that involves your trampoline? We would love to see it and possibly share it.
Taylor Swift was recently spotted jumping on a trampoline for a photo shoot in Los Angeles. The country / pop star was seen sporting various outfits and enjoying herself on a trampoline. Check out the photo gallery of Taylor Swift's trampoline photo shoot. She also gave a radio interview and shared a funny story about writing one of her hit songs with Ed Sheeran on her backyard trampoline.

Extreme Ironing on a trampoline. You have to see this video to believe that someone actually attempted this. The result is a funny trampoline video.

The Trampoline Dog: We at Trampolines Los Angeles love our pets and the great things they can do. Here is a video of a dog (looks to be a boxer breed) jumping on a backyard trampoline. Our latest edition to our Trampoline Dog video is Mudd the Bulldog.

The newest exercise craze among celebrities is incorporating trampolines in their exercise routine. Madonna and actress Gwyneth Paltrow have reportedly included aerobics on trampettes as part of their exercise regimes, and Posh Spice is also apparently a fan of the practice. An hour of bouncing on a trampoline can burn more than 200 calories. Read more about it here.

Our services include assembly, repair, refurbishment and relocation of swing sets and play systems in the greater Los Angeles, California area including Ventura County. Let us help you get the play system that works best for you and your children.

Our goal is to make that process as easy and pleasant as possible.